The Ottoman woman : a comparative perspective

The Ottoman woman : a comparative perspective

The aim of the conference (30 June-2 July 2011) was to examine the role of women within Ottoman society and to question some of the more stereotypic representations of women not as integrated, active and visible members of society but as excluded, or contained and secluded objects.

Law and the court 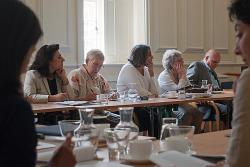 The organizers gratefully acknowledge the support of the Thriplow Trust, the George Macaulay Trevelyan Trust and Newnham College.